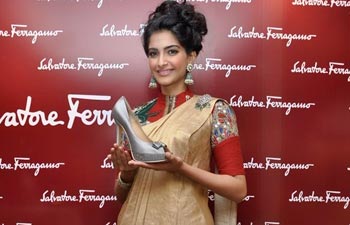 Well, some people in this world are born with Luck!! So let’s have look of Salvatore Ferragamo heels for Sonam Kapoor.

This Ferragamo for Sonam Kapoor are part of Shoes for a Star program. In the years to come, the shoe cast of Sonam Kapoor will be exhibited at the Salvatore Ferragamo museum in Florence, alongside other precious shoe casts and shoes from stars and celebrities of all times, such as Audrey Hepburn, Marilyn Monroe, Sofia Loren, Madonna and Drew Barrymore.

So You liked her heels? Send your views through comments and don’t forget to stay in touch with on Facebook.

Next, some Lovely DIY Tutorials, Some Good news and some Giveaways are coming in!! Keep Visiting..
Love You all..