Despite the, “KW” earrings, flirtacious conversations, or being caught on camera holding hands they still remain hush on whether they are, “good friends” or in-love. We’ll come back to this topic! 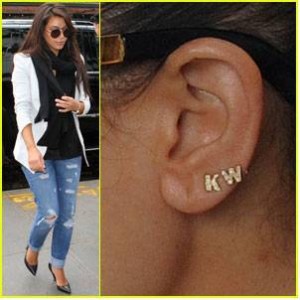 Kim Kardashian seemed to be unaware of the issue Kanye was having, and Kanye seemed unaware that his thigh was exposed until he felt a cool breeze, and pulled his pants up, haha… but I’ll admit… this does not dampen any of his swag… I mean it goes to show… even celebrities have flaws, and mishaps!! After all… we’re all people, right?
Clearly we know that Kanye West is smitten by miss Kimmie K he professed his love in his latest song. Lyrics below:
“And I’ll admit, I fell in love with Kim
‘Round the same time she had fell in love wit’ him
Well, that’s cool, baby girl, do ya thing
Lucky I ain’t have Jay drop ‘im from the team
La familia, Roc Nation”

When I heard this song… I was quite blown away! He really made quite the impact in just 40 words! Professing his love for Kim, the fact that his good friend Jay-Z owns the team her soon to be ex-husband Kris Humphries played for! Well, well, well… looks like we have quite the information to piece together that there may indeed be a romance brewing between Kanye and Kimmie. I personally love the both of them and if they are in love… best wishes to them… they both deserve it!

This is a Guest Post from Pooja Patel. She writes amazing stuff, truly! You can catch her at [email protected]. Thank You Pooja from Team MyfashionVilla.com