About Chris Barreto:  In 2001, Chris was invited to exhibit BEHUMANART at The Guggenheim Museum in New York. It is an honor that has been bestowed on very few of her colleagues. Chris’ apparel was on display and she gave a live performance piece representing the indigenous influence in the Brazilian culture through the use of body painting “It was an honor and so important for me representing my country in “Brazil, Body and Soul. All of my art was accessible.

In 2002, she was paired with Master Pastry Chef, Francois Payard in the International Chocolate Show, and designed a dress for the fashion show made entirely from chocolate. It was the only chocolate garment chosen for exhibition by the Museum of Natural History – New York. From that year on, she was invited to design for the annual show.
In 2003 Chris premiered her ready to wear collection during New York Fashion Week. In 2004, she mass-produced and distributed the her line for the first time.

Since 2004, Chris has been developing her line of Brazilian Bikinis, crafted entirely in her native Brazil, and working out the details for mass distribution. She continues to show her collections of ready to wear and couture and to perform and promote her indigenous culture.In 2005 Chris moved to Hawaii and created her line of Bikinis, and Resort wear”BRASIL SEGREDO”. 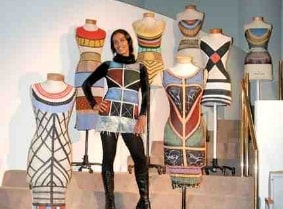 In 2009 Chris moved back to NYC, and incorporated her multimedia talents as an actor and singer, performing in the city.2011- Chris launched her first music album: “BERIMBAU REGGAE” a mix of electronic and organic beats recorded and produced in Hawaii.

Q) How did you first get interested in becoming a fashion designer?

Ans: I started creating clothes to myself as a performer. I am also a singer, and since very young I loved to have some special clothes for stage!

Q) What is most challenging about your work now?

Ans: Right now my challenge is to market everything I have done as a fashion designer, and have team work, because , I can’t do all by myself, and I have been very busy as a singer, and , always, I wear my clothes , and everyone loves it.
Q) Do you think one should have a strong sense of sewing skill for becoming a fashion designer?

Ans: No, I never had myself, I learned with my experience, and actually, it was a challenge that increased my creativity. Being a fashion designer is about a great team work, it is important to have a very skilled seamstress with you for sure.

Q) The celebrity you would love to design for?

Ans: Nobody in particular, I think that had designed for Madonna, was the highlight of my dream as celebrity designer.
Q)  Would you like to give any fashion tips to our readers?

Ans: Yes, get a business partner from the beginning on of you career . Fashion without it , is not possible.It doesn’t work at all.